Skip to Content
A homemade version of the the classic Arnott's Milk Arrowroot Biscuit.
Jump to Recipe

The original commercially-produced biscuit has been around since 1888 and Arnott’s describe it as “baked golden and crunchy with arrowroot flour for a deliciously simple taste.”

While this Arrowroot Biscuit isn’t an exact match for the store-bought version, that description most definitely applies also to this biscuit.

To make these biscuits you’ll need:

Please keep scrolling until the end of the post for the precise measurements.

I’ve cut this recipe down a lot and it still makes 42 biscuits. The original recipe (also included below) makes 142 biscuits!

Many people won’t have Arrowroot in their pantry these days, but rest assured you can still buy it from major supermarkets. It might also be called Tapioca Flour.

Combine the flour and arrowroot, and then rub in the butter cubes until you have an even texture.

Next, stir through the sugar.

Whisk the egg and milk together and then stir through with a butter knife.

The mixture should hold together and form a dough. If it doesn’t, add a few drops extra milk and stir again until you have a dough.

Next, you roll out the mixture on a floured bench until it’s about 3mm thick.

Use a cutter to form a biscuit shape. I used an Easter Egg shaped cutter and bent it to form an oval shape, which is the traditional shape of the Arnott’s Milk Arrowroot.

I also pricked the biscuits with a fork in a similar patter to create a real Arnott’s copycat look.

Finally, it’s into a “brisk” oven for 10 to 12 minutes. A brisk oven is somewhere between moderate and hot. A general guide is 190 degrees celsius fan-forced. Add an extra 5-10 degrees for a standard oven.

Once out of the oven, allow to cool on a rack and then enjoy.

Just like the original biscuits, everyone will love these biscuits. They’re perfect to dunk in a cuppa and little kids will love these simple, sweet and crunchy bikkies.

This recipe is from the pages of a “Headlight” SR flour recipe book from the early 1930s.

Keep scrolling to the recipe card at the end of this post for the tested and updated recipe with step-by-step instructions. 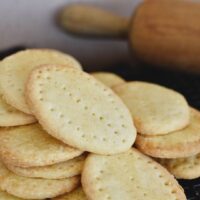