The Iced VoVo has been a favourite biscuit in my family since I can remember.

Nana Ling marked this Iced VoVo recipe with a couple of crosses, her rating system for special recipes.

It seems it was popular in the family long before I was even born!

It’s not just my family who loves these pretty pink-iced biscuits, of course.

The Iced VoVo biscuit has been an “Australian icon since 1906” according to Arnott’s, the company that’s responsible for the mass production of this biscuit.

What makes the Iced VoVo bikkie so special?

Is it the icing? The jam? The coconut? The sweet biscuits base?

I think it’s the combination of all of the above that makes this biscuit so special.

Even former PM Kevin Rudd acknowledged their place in Australian hearts when he mentioned treating his staff to a “cup of tea and an Iced VoVo” before starting the work of governing the nation the next day.

Apparently that comment gave sales a nice little boost, too!

Let’s talk about the end product first. A homemade Iced VoVo vs the Arnott’s version… well, there’s really no comparison.

The homemade version is simply wonderful. It tastes like a whole packet of the store-bought version packed into each little homemade biscuit.

Okay, so moving on to the process of cooking up a batch of these little beauties.

It’s a messy and, at times, painstaking process. There’s coconut, jam, sticky marshmallow icing… and then you have to try to make it look neat! Arnott’s and their manufacturing machines definitely win out here.

But if you’re keen, it’s definitely worth the effort. Just be prepared to make some mess.

And make sure you have some piping bags on hand – they’re a must when adding the pink stripes that give the old-fashioned faves their famous look.

If you want to browse more of Nana Ling’s biscuit recipes, head over to the biscuits page. 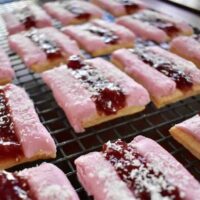