This recipe for Spicy Fruit Rolls is an Arnott’s copycat recipe.

We called them “pillow biscuits” or “cushion biscuits” years ago.

It’s no wonder we nicknamed these biscuits “pillow biscuits”.

They not only look like little pillows, they’re also lovely and soft to eat.

These biscuits were popular years ago, and you can still buy them in supermarkets today.

But I reckon you won’t want to buy them once you bake up this homemade version!

The first step is making up that flavour-packed fruit filling.

Currants, raisins and dates go into the mix. I minced them using my trusty KitchenAid food chopper, however you could also use a food processor, mincing attachment or old school mincer.

You then add this mixture to a saucepan along with a little water, sugar and the all-important spice – mixed spice.

Simmer for two minutes and then put the mixture in the fridge to cool.

The biscuit mix is a simple butter, sugar, egg and flour mix.

The key to succeeding here is following the instructions to refrigerate the mixture, both before rolling and before cooking off the mixture.

I’ve included step-by-step instructions and pictures in the recipe card below to help you prepare the biscuit mix, roll the biscuits and make perfect little pillows.

Once you have the biscuits on the tray ready to bake, don’t forget the last step before popping them in the oven.

Place the tray in the fridge for at least half an hour to help the biscuits keep their pillow shape during baking. 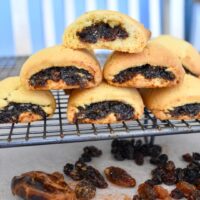 I’ve become completely addicted to the pocket version of these in lockdown and making my own is so much nicer. My Small absolutely loves them too

Hi. Oh, that's so lovely! Nice to have things that get us through lockdown, that's for sure. I loved these as a child, too. Take care and fingers crossed we're out of this lockdown soon. x

Well gosh these bought back a few tasty memories. How delicious!

They sure do! Thanks for your lovely comment, Megan x

What spices are in your ‘mixed spice’?

Hi Bobbi. Mixed Spice is sold in Australia and has this listed as its ingredients: Cinnamon 82%, Allspice 9%, Nutmeg 9%. I hope that helps! Happy Cooking! Libby