Skip to Content
An old English recipe with a chewy centre and sweet, crackly top.
Jump to Recipe

This Chinese Chews recipe is one that isn’t so popular these days.

But ask anyone over a certain age and they might just have fond memories of it being one of their mum’s or grandmother’s signature treats.

And it would be hard to forget this slice if you’ve been lucky enough to enjoy it. It’s filled with dates and walnuts (yum!) but it’s the texture that takes it to another level – moist and chewy at the centre with a sweet, crackly top.

Where in the world is this recipe from?

This recipe was popular in Australia, the UK and US during the early 1900s.

The Chinese in Chinese Chews is a bit of a mystery. Some have wondered whether it’s because two key ingredients – dates and walnuts – were considered “Eastern” flavours in years gone by.

Perhaps it makes more sense to call this recipe “Date and Walnut Squares” or something similar.

The recipe I’ve used here was inspired by those published in Australian newspapers from the 1930s to the 1950s.

A little digging on the internet revealed that the earliest published record of Chinese Chews appears to be that published in a 1917 issue of Good Housekeeping magazine in the US – as sent in by a Mrs Platt from North Bend, Oregon.

Anyway, enough history and wondering how this slice got its name.

Let’s fast forward and whip up a batch right now! And I assure you that you won’t be sorry. This recipe is straightforward and the result is amazing.

As always, home cooks really knew what they were doing back in the early 1900s.

To make this slice, you’ll need a slice tin (approx 28 x 18cm) lined with baking paper and a sifter for the dry ingredients.

See the recipe card at the end of the post for quantities.

Start by beating the eggs on med-high for 5 minutes or until pale coloured and fluffy.

Next, add the sugar slowly while beating on low speed. Once all the sugar is added, beat on med-high speed again for one minute.

Mix in the dates and walnuts. Make sure you’ve chopped them finely.

Sift the flour, baking powder and salt and fold into the mixture before adding the butter and vanilla extract and then stirring to combine.

Pour the mixture into the slice tin. It will be thick-ish and a little sticky, so you’ll need to use a spatula to spread it out evenly in tin.

Bake for 25-30 minutes or until a golden-brown colour and firm to touch (it forms a crust at top).

Allow to cool to a warm temperature in the tin, then remove using the overhanging baking paper.

Cut into small pieces, squares, bars – whatever suits you – using a sharp knife and allow to cool completely on a cooling rack.

Store your slice in an airtight container at room temperature for up to one week.

And if you love dates, try the Sticky Date Pudding or Date and Walnut Slice. 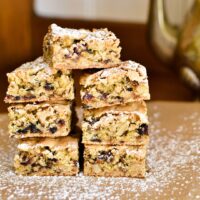 This is a wonderful recipe. I have made it twice, we love it. So easy and so delicious.

Isn't it great! So easy and terribly addictive. Enjoy x

Make on Sunday Libby Need eggs have every thing else. Rate later when taste test on kids next door Ciao for now Kim (Adelaide)