Skip to Content
Make your favourite bakery treat at home with this easy-to-follow Chocolate Eclairs Recipe.
Jump to Recipe

Out of all the wonderful bakery treats, Chocolate Eclairs have to be one of the all-time favourites.

These little oblong pastries filled with cream and topped with a glossy chocolate icing may have originated in France, but they’ve made themselves quite at home in bakeries around Australia.

And while I love a Chocolate Eclair from the bakery, I reckon you can’t beat these homemade ones.

The Eclair may have originated as the fancy-sounding “pain a la duchesse” during the 19th century in France, but this recipe comes straight from the pages of my Nan Mac’s handwritten recipe book.

Nan Mac was Nana Ling‘s only daughter and spent all of her life in the Hunter Valley, just like Nana Ling. She kept Nana Ling’s recipe collection for all those years and even added to it – though her handwritten recipe notes aren’t quite as extensive or organised as Nana Ling’s.

She also didn’t date her recipes, though the front cover of the book tells me she was married (so after the early 1940’s) and still living out in the bush at Buttai (so before the early 1960’s when they moved into “town” aka Kurri Kurri).

Perhaps someone who recognises this style of exercise book might be able to help with dating it? If you have a good idea of the era, I’d love to hear from you in the comments below.

While it may not be as impressive as Nana Ling’s recipe collection, Nan Mac’s still contains some absolute gems – and this Chocolate Eclairs Recipe is one of them.

And it’s surprisingly easy to make this popular treat.

What is an Eclair?

An Eclair is a pastry made with choux dough – yes, the same dough used for profiteroles – and is generally filled with cream and topped with chocolate icing. While profiteroles are a ball shape, Eclairs are an oblong shape.

The key to great Eclairs is getting the choux pastry right and then baking it until it is crisp on the outside and hollow on the inside.

The step-by-step instructions are below in the recipe card, however I want to highlight these points to keep in mind when making the choux pastry:

Getting the shape right

Eclairs have that perfect oblong shape, and there are a few tricks involved in getting it right.

First, use a 2cm piping nozzle – ideally open star or french star shape. This helps to maintain the shape of the eclair and reduce cracking of the pastry.

If you only have a round nozzle, simply scrape the eclairs, once piped, with a fork to create ridges.

Next, get a measuring tape so you can pipe 6 eclairs that are 13 cm in length.

Pipe onto a baking tray covered with baking paper, holding the piping bag at about a 45 degree angle.

Make each end of the eclairs a little fuller, only very slightly, and use a knife or kitchen scissors to finish piping each eclair.

Baking off your Eclairs

To get that lovely crispy outside and hollow inside, there is a two-step baking process.

First, bake for 25 minutes in a moderately hot oven. After removing from the oven, allow the pastries to cool for 10 minutes and then cut Eclairs in half horizontally, leaving one long edge intact.

Then, return Eclairs to the oven for another 3 minutes. Allow to cool completely before filling and icing.

The final steps: filling and icing

So, once the eclairs are completely cool, you can fill and ice them.

The filling here is simply cream and a little sugar, whipped together until stiff peaks form. Use a closed star shape nozzle to pipe the cream into the Eclairs and then place into the fridge while you make the icing.

The icing is made by pouring heated cream over choc chips (dark or milk – your choice) and stirring until combined. Then, pour the icing into a shallow tray or onto a dinner plate and carefully dip the top of each Eclair into the icing.

How long do Eclairs last?

Make Eclairs up as close as possible to serving time for best results.

They do last up to a day in a sealed contained in the fridge – if you’re lucky enough to have leftovers! 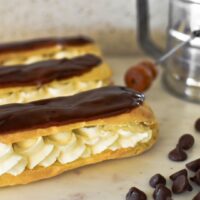