Go directly to Nutella heaven with these Ginger and Nutella Cookies. Fluffy Nutella buttercream sandwiched between crisp ginger biscuits and topped with a Choc Nutella drizzle.

A new twist on an old favourite

We’ve added Nutella to the mix because ginger and Nutella is certainly a combo worth creating. Delicious.

And while Nutella may seem like a more modern touch, it’s something that has its origins back in Nana Ling’s days.

Nutella was introduced into Australia in 1978, however it was originally created in Italy in 1946 as a “a smart solution to a tricky problem: the shortage of cocoa supplies following World War Two.”

The chocolatey, nutty spread didn’t get its current name until 1964. A year later, it was poured into the iconic jar with the white lid that we still see on store shelves today and exported to Germany.

Nutella love quickly spread to the rest of Europe and finally arrived on our shores in Australia more than a decade later. 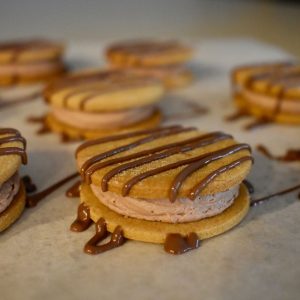