Skip to Content
A recipe from the 1940's for decadent Christmas Cake on a tighter budget.
Jump to Recipe

This recipe for Rich Christmas Cake is from Nana Ling’s newspaper clipping collection and is dated November 1942.

She’d taken this recipe from the pages of her local paper, The Maitland Mercury.

Like many recipes in her collection, this one tells a bigger story. It takes us on a little journey back to a time when Christmas cooking may have been a welcome distraction from a world that was at war.

As Christmas drew near in 1942, World War II was entering its fourth year. Enemy submarines had come a little too close for comfort to our cities of Sydney and Newcastle mid-year and at the start of the year Darwin had been attacked by air.

I’m sure fear must have lingered heavy in the air as Christmas attempted to weave its usual magic.

However, Christmas was still a time to celebrate – provided the celebrations were in accordance with the “austerity plan.“

This recipe is part of a section of recipes that had been sent in by readers entering the paper’s weekly recipe competition. The introduction to the recipe competition gives us a taste of Christmas 1942-style. Readers are asked to send in recipes with “economy” as the watchword as “needless extravagance will hinder the war effort.”

A Rich Fruit Cake (on a wartime budget)

There were many economical but lovely recipes on this page that Nana Ling tore from the paper nearly 80 years ago. But one in particular was intriguing.

It was described as “cheap but rich” and had one ingredient I’d never heard of before: “browning”.

Luckily, the reader who’d sent this one in – Mrs Fielding of East Greta – had included instructions for making browning. It turns out to be a burnt sugar mixture that was quite simple to make. And, yes I think it makes a big contribution to the richness of the cake.

While I say it’s simple to make, it is something you need to take care with as you are creating a very hot sugar mix and it will burn quickly (and burn you if you don’t take care).

I’m not really sure that this recipe is much cheaper than your average Christmas Cake, though there wasn’t any alcohol listed in the ingredients. (Though I’ve sneakily added it as an option here to feed the cake when it first comes out of the oven).

It also lists “mixed fruit” as an ingredient rather than getting specific with certain amounts of types of dried fruit. So you can just use up whatever you have on hand like I did. Remember, “economy” is the watchword here!

So, here it is. Another recipe clipping from Nana Ling’s collection.

Keep scrolling for the recipe card which contains the tested and tweaked version of this “Cheap but Rich” Christmas Cake. 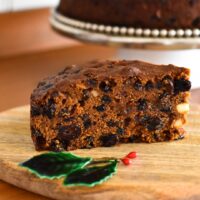