Skip to Content
Chocolate, coconut... who can resist this recipe from 1940
Jump to Recipe

Sweet sponge cake dipped in melted chocolate and sprinkled with coconut… these cute little treats are perfect for parties, festive times or anytime you have a little sweet craving.

Snowballs are little treats wrapped in chocolate and sprinkled with coconut.

But Snowballs recipes vary… some are filled with marshmallow, while others are made in a similar fashion to Rum Balls or Apricot Balls, with condensed milk and crushed biscuits or cereal.

This Snowballs recipe is from 1940 and is one of Nana Ling‘s handwritten recipes.

On the inside is a sponge-cake type filling. Which goes perfectly with the chocolate and coconut it’s dipped into!

Nana Ling has attributed this recipe to “Nan” – I wonder if it’s from her Nan, who would be my 3 x great grandmother?

To make these snowballs you’ll need:

You’ll also need mini cupcake tins. The original recipe calls for gem irons, and while these are still available at specialty stores today, I’m guessing you might not have them. So I’ve cooked these up in mini cupcake tins.

The shape may not be quite right, but I think close enough is good enough here.

If you do happen to have gem irons, I’d love to see a picture of the results. Tag me on Facebook, Instagram or TikTok!

Start by pre-heating your oven to moderate (170 degrees celsius, fan-forced) and greasing the mini cupcake tins.

Beat the eggs for about 3-4 minutes on med-high or until pale-coloured and frothy.

Next, add the sugar gradually, beating between each addition. Beat again for another couple of minutes once all the sugar has been added.

Gently fold through the sifted flour.

Dissolve bicarb soda in the hot milk and then fold through the mixture.

Next, spoon mixture into tins so each is half-filled with mixture.

Bake for 10 minutes before allowing to cool on a wire rack.

Once completely cooled, melt the chocolate and copha in a microwave with 20 second bursts, stirring between each burst until completely melted.

Dip the mini cupcakes in chocolate and place on a wire cooling rack (with baking paper underneath to catch chocolate drips).

Sprinkle with coconut and allow to set.

Serve your Snowballs piled high on a plate.

The original recipe suggests you can split and fill with whipped cream. This sounds amazing, but I love them just as they are, too. 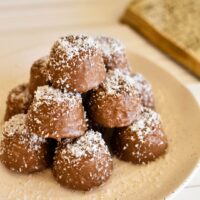