Skip to Content
The Aussie classic. Sponge cake squares dipped in chocolate icing and rolled in coconut.
Jump to Recipe

This Lamington Recipe delivers everything that is wonderful about the Aussie icon – perfect sponge cake and a rich chocolate sauce, all rolled up in plenty of coconut.

Here, we’ll take a quick peek into the history of the Lamington before running through the steps involved in making up this Aussie treat that we’ve been enjoying for more than 120 years.

Lord Lamington and his clumsy cook

Today you can find Lamingtons in supermarkets, bakeries and cafes all throughout Australia. We LOVE them.

It’s all thanks to Lord Lamington, the Governor of Queensland from 9 April 1896 to 19 December 1901. He’s pictured here with Lady Lamington.

According to folklore, Lord Lamington was averse to waste. When a cook accidentally dropped a sponge cake into some melted chocolate (oops!) he suggested it still be eaten, but rolled in coconut to avoid messy fingers.

This story is not without its controversy.

Some suggest it was the Lord Lamington’s chef, the French-born Armand Galland, who came up with this popular coconut-encased cake as a way to use up stale sponge.

Others suggest the Lamington was born in New Zealand. Yes, really!

I think we should all just agree to share this much-loved dessert, much like we should also do with the Pavlova.

This recipe is best tackled in stages.

It’s not a difficult recipe, but it is one where a little planning makes a big difference.

Stage One. Make the sponge cake.

The sponge cake can be made up the day before or even made up and then frozen until you need it.

Once cooled, the cake should be trimmed on all sides using a large serrated knife. Use the knife, or a cake leveller if you have one, to also even out the top of the cake.

Next, cut both of the sponge squares into nine smaller squares, so you’ll end up with 18 pieces.

Do you see something starting to resemble lamingtons?

The chocolate sauce will make or break your Lamingtons. Nana Ling’s chocolate sauce has a couple of secret ingredients to make sure there’s more “make” than “break” happening.

First, there’s an egg white in there. This helps set the icing and firm up your Lamingtons so they aren’t too squishy.

Second, the original recipe contains a tablespoon of port or brandy in the chocolate sauce. You can choose to include this, which adds a “next level” richness, or leave it out for a family-friendly version.

Both options are included below in the recipe.

Now for the fun part.

Set up your kitchen bench with your sponge squares, chocolate sauce and bowl of coconut close to each other. Dip each square in the chocolate sauce, making sure all sides are covered evenly.

Remove the chocolate coated squares with two forks and allow to drain a little before placing in the bowl of coconut.

Coat each square completely in coconut and place onto a lined tray.

Once you’ve coated all of your Lamington squares and placed them on the lined tray, place into the fridge to set.

Okay, now for another controversy.

Many would say Lamingtons don’t need a filling. I agree. They’re absolutely perfect without anything else except perhaps a nice cuppa on the side.

However, some like to split the Lamingtons and add cream. Even more perfect!

If you’re making the Lamington Recipe using Nana Ling’s alcoholic sauce variation (see recipe below) try adding a tablespoon or two of Bailey’s to the mock cream for the ultimate treat – Boozy Lamingtons.

Some people like to add some jam with the cream too. I’m not one of those people. I’ll look away if you decide to add jam!

With a jelly sauce replacing the chocolate sauce, these pretty (and delicious) little treats are very popular. 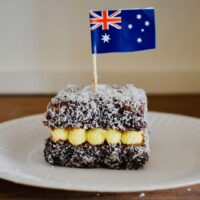 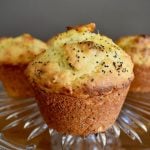 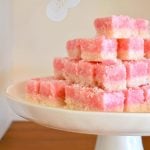