Skip to Content
An Aussie dessert tradition that involves a little magic!
Jump to Recipe

The Choc Ripple Cake is perfect for those who want to impress with minimum effort and maximum impact.

You will, however, need to plan ahead a little.

This dessert needs at least 6 hours standing time in the fridge, preferably 12 hours.

Provided you’re organised, though, this is a simple, versatile and decadent dessert. And the best thing? There’s absolutely no baking involved!

So, you may be wondering how on earth you get those lovely strips of chocolate cake without baking.

As the name suggests, the cake is really softened chocolate ripple biscuits. If I hadn’t made it myself, though, I’m not sure I’d suspect that the “cake” is really just biscuits softened by the cream filling. It really is very cake-y.

The biscuits, which are now made by Arnott’s, were originally made by Brockhoff.

After acquiring Brockhoff in the 1960’s, Arnott’s has continued to manufacture this popular chocolate-y biscuit. Which is good news, since it’s the star ingredient in this recipe.

And as you can read in the ad, if you like Chocolate Ripple biscuits, then “you’ll go crazy” over the cake.

The ad also suggests you sprinkle your cake with chopped walnuts, just as Nana Ling suggests in her recipe.

The great thing about this cake is that there are plenty of variations you can try, both in the flavouring you add to the cream and the added flavour sprinkled over the top of the cake.

And if Chocolate Ripple biscuits aren’t available in your country, just use any sweet chocolate cookies that come in a packet.

I’ve opted for Baileys Irish Cream here but you could add a number of other things, including vanilla essence or freshly brewed coffee.

A great cake to make with kids

Miss Z made her own kids version of the Chocolate Ripple Cake, using vanilla essence to flavour the cream and grated chocolate to decorate.

The hardest part of this recipe – and it’s really not that hard once you see it done – is putting the cookies together with the cream. You also need to slice the cake diagonally to reveal the striped pattern.

Check out the short video in this post to see the easiest way to assemble and slice the cake. 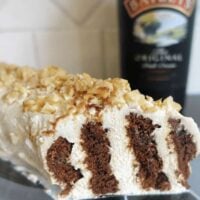 Hi Tonya - yum! I'll have to try that for sure and add it in as a variation idea. Thanks!

First time using Baileys. Delicious. Never would of thought of it. Thanks you.

Hi Sarah. You're welcome, glad you liked it with Baileys! Thanks for the 5 star review, much appreciated ?

Absolutely fantastic I have been making the Choc Ripple Cake for my family for the past 5 years but just the traditional recipe! This year I am definitely doing this one thank you so much.

Awesome! Thanks for commenting, Kasey ☺️